A Bit Of Background

Andrew is the eldest brother of four, he has two sisters, myself and Ann and one brother John (my twin). He is married to Jayne and has one son called Jonathon and they live in a beautiful part of wales,their home is surrounded by fields,which is just as well as he has his own man shed.,where he goes and thrashes hell out of a set of drums! 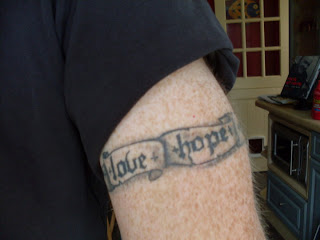 He now works as a "guitar technician". I don't think he is your typical 57 year old ( he has just had his first tattoo! see pic) He is a drummer in the rock band RESISTANCE, the band was re formed back in 2008. They get their main inspiration from the likes of Thin Lizzy, David Bowie and ACDC amongst others.
http://www.myspace.com/resistanceinfo
Not so long ago ,his band played at my sisters 40 th wedding anniversary,what a brilliant night we all had!
He has repaired guitars for over 30 years, from a simple re string and set up to modification repairs, upgrades fret dressing and much more. His last well known customers have been from the group The Alarm.
He has gone on to tour with Mike Peters ( The Alarm) as his guitar tech. 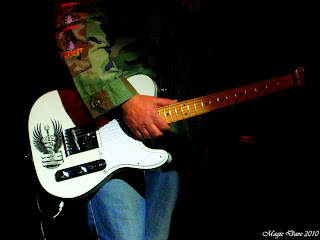 http://www.thealarm.com/directaction/index.html
Posted by Janet at 05:52

Email ThisBlogThis!Share to TwitterShare to FacebookShare to Pinterest
Labels: A bit of background

Good Sunday, Janet!
Andrew sounds like a talented man, he must have some special talent - to make such a beautiful instrument AND have it sound good!
No, I don't think Andrew is a typical man, most fellas that age wouldn't have the courage to get a tattoo let alone, face the battle he has begun.
Tell Andrew to take care and you do that yourself!

Well, Sharon has said everything perfectly, as usual, so I'll just say "ditto."

Ditto from me with what Sharon said! I admire someone who is able to do what they love, and love what they do, even if it is what some may think of as "unconventional!" So many people never have the courage to do that and I admire Andrew for that!
I'm glad things are off to a great start!!!

Cool guitar. Are you sure his is a "real" tatoo and not one of the play ones?! (Heard your family has a penchant for pretending to get a tatoo!!) Cassie

I spat on it and rubbed-believe me its real ! x

well done Andy so proud of you xx

Janet,this is great what you are doing for Andrew, I'm sure he must be very encouraged by it all

sorry to hear about Andy, he is a fab guy, love seeing him set up for Mike. I know that Andy from Killing for Company was chuffed with his guitar. Will be getting a wrist band x