Not quite made it -but still first on the leader board ! 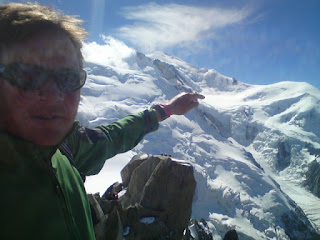 Pete phoned this morning-he didn't make the summit by a mere 400 metres Things went a little awry from the beginning with the train failing to take them to the starting point ,meaning an extra 1000 metres climb before the start of the assault proper.They left camp at 11pm to try and make up for lost time.- Doing some serious climbing in the dark-they scrambled and climbed for the next 10 hours before all three suffering a little from the cold decided they had to return . Pete said they had tried to take it all on in too short a time scale and altitude sickness and the cold had them beat ! Now fully rested they are all talking of returning next year-well done for getting as far as you did ! - I am glad to hear you had a brilliant time and enjoyed doing it, still a great challenge .You are still top of our leader board........for now!!!
One of Andrews band members Gaz turned 40 at the weekend ,all members of the band showed up to play at his party celebrations-a good night out was had by all-Ann and I went round the room selling charity bands and made £100.47 for MNDA. a great result !! I would just like to say a big thank you to Gwyn and Mal for their exceedingly kind donation of a motor bike which we will be selling and passing the funds on to MNDA, What a wonderful kind gesture !.We will be hearing more from Gwyn and Mal as they travel in their camper van around the world-Maybe guess their destination/or where are they now competition ? Sharon and John your wristbands are in the post .thank you for your support x
Posted by Janet at 12:49

Is great that Pete and company made it as far as they did!
Sounds like a great 40th Birthday bash! Ahhhh, to be 40 again! :-)
Have a nice evening and have a much deserved rest!

Well, it sounds like they made it pretty darn far! Congratulations to them all.