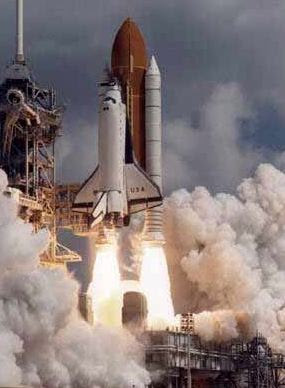 Now some of you might recall how last year as part of my travelling bands competition I tried to get a band into space - by writing my request to Nasa - I then stated if that was not possible then maybe please could I have a photograph of an astronaut wearing a band or even a technician [ you know the sort of thing- with head phones and a mike on ! ] or in desperation an office cleaner ! [ Well- what ? I didn`t want the band going to waste !! ] You might also recall that upon discovering a reply from Nasa and rather excitedly calling out to hubby, who had been languishing in the bath at the time- how he had hot footed it out of the bath - leaving wet footprints all along my hall carpet- to stand butt naked looking over my shoulder as I opened my email-excitement turning to disappointment - as the email stated Nasa regrets they cannot fly a risk band into space [doh !] , only few exceptions such as for natural museums or historical purposes, request cannot be accommodated . Blah Blah Blah ! oh drat !........ But ahhh ! that wasn`t the end of this tale as thanks to fellow blogger Cassie who wrote a comment saying- Janet , why not try and get a photo in space on the last shuttle but you need to do it ASAP ,there are only 2 flights left and they are in November....Best of luck !
We filled in the forms and added the photograph and forgot all about it until the other day when the certificate came through ! Andrew your photograph has been aboard the space shuttle Discovery on mission STS-133 from February 24 th - March the 9 th 2011 , the certificate states your face was flown on Discovery`s mission to the international space station at an altitude
of 220 miles above Earth, it flew at a speed of more than 17,400 miles per hour as it orbited our planet ! [ double click to enlarge photograph /certificate] 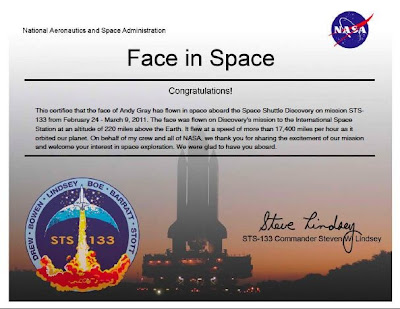 Andrew , I can see you waving and giving us the thumbs up ! it looks like you had a good time ! well not quite a band in space-but it was the next best thing as you are wearing your wristband in the photograph !! 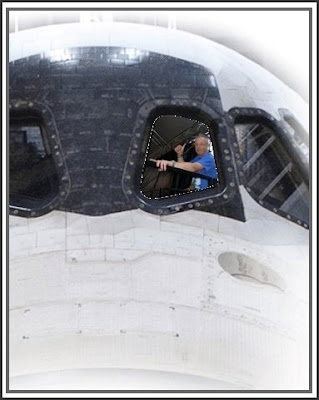 Thanks Cassie that was a brilliant idea of yours and a lot of fun to do ! xx
Posted by Janet at 06:36

How very exciting and how wonderful Andrew got on that space shuttle. Had to laugh at the description of your hubby jumping out of the bathtub, even though the letter was initially disappointing. It all worked out in the end.

Aw... well done you for sorting this out for Andy... got tears in my eyes now!

Hi Jan' well "wow" I was totally gobsmacked when I saw this, what great work your doing to promote MND!

I've always wanted to go into outer space and this is the nearest I'll ever get! So a picture of me in a MND T- shirt and a wristband up there in the shuttle is just brill .. I'll give you a wave every time I circle you all.

Thank you all for your great support and promoting the fight against MND
Love Hope Strength.
Andy..xx

Thanks Andrew ! that means a lot to me ! lots of love xx

Jan, You've done it again, I am proud of you and Andrew. Your smiling, he's waving and I'm crying.

Oh Janet, that is so wonderful!

Wow! Terrific... what a thrill... face in space... that is just too cool and the wristband shows up very well as does Andrew's thumb and handsome face. Well done!

Just out of this world.....literally! Top idea Jan, the Gray clan pull together once more - a truly special family. Love to you all, Nia & Family, Australia xxxx

Great result....good old Nasa....I am happy that they accomodate these requests. I think being on the last voyage is even more special. I head the shuttle is now sold to the Smithsonian.

Not too many people can say that their picture went to space...

How amazing that was. Congratulations! I hope all the astronauts sign it and you get it back.
Have a blessed weekend! ♥

Brilliant! Clever you Janet for sorting it all out! A photo in space...how wonderful is that!

I follow the fabulous John Gray's blog. Popping over here to send some love to you from the great state of Alaska! xo

I'm over from John's too. This is wonderful idea. My huband & daughter will be doing a transatlantic crossing in the Autumn. I could get my daughter to wear one in the middle of the ocean for you. Where can I buy them ?
All good wishes to you all.

I stopped in from John`s blog too. Sending you good wishes from Pennsylvania!

Thank you for all your wonderful comments and words of encouragement and good wishes !
The bands can be bought from this site-if you scroll down to the donate button - they cost 2.50 each and can be paid by paypal
or contact me at janprestatyn@hotmail.co.uk !
That sounds great bad penny !

Popping in from John's blog as well. Had trouble sorting out the 'band' bit, though. Didn't realise that it was a wrist-type band. Thought it was a pop or rock group! Duh! Anyway, blessings to you both, and still have the vision of wet footprints and naked butt in my head!

Pardon the pun but that is just out of this world.
what a fantastic achievement and there can't be too many people who have had their pic look down upon the world.
astronomical (ok no more space puns)well done Janet, such a lovely, unique gift.

Wonderful idea! I'm here from John's blog also - hello and best wishes to all of you. Like Vera, I at first assumed it had to do with a musical band, but soon caught the drift.

wow what a neat thing to happen, and a once in a life time thing as well.......well done.

How WONDERFUL Janet and Andrew...it pays to not give up doesn't it! Congratulations to both of you. Maura :)