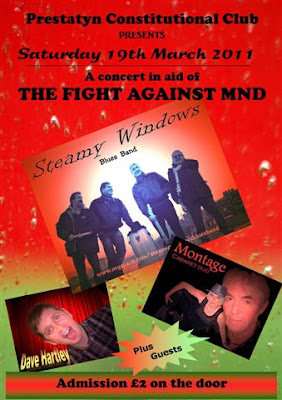 Well , not long to go now-I can`t believe how fast time flies ! Andrews friends and fellow musicians from the Blues band " Steamy Windows " are doing a brilliant job of organizing this gig to be held at the Prestatyn Constitutional club this coming Saturday the 19th March .They now have a support act , a singing duo called " Montage " and a comedian/ compere for the show ! Entry fee is just £2 on the door and there will be a raffle with some great prizes ! Doors open 8pm ! Please come along and join us -it will be great fun ! Steamy Windows are a fantastic band -all the money is going to the Motor Neurone Disease Association. Phil who is the lead guitarist in the band has offered to write a piece for the blog , this is his story ............ 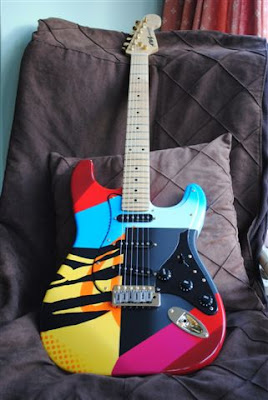 Above is the AWG Stratocaster Andrew built for Phil [AWG.....stands for Andrew William Gray ]

I first met Andy in 1989 when I went into Jones` electrical shop to get my technics tape deck calibrated to 4`40 as it was a direct drive unit I had to have it spot on to allow me to play along in concert pitch ,as I was so impressed with Andy`s work I bought a second one as a back up. Anyhow after a few years passed we met up again as I needed my guitars looking after by a top guitar tech , and I know , Andy was the best. He taught me a lot over the years , many a time he would text me to come down to the Barn Studio and show me how to set up my pedals and my amp , setting the tone just right to allow me to get my blue tone I have always wanted.Then came the day Andy asked me if I would like him to build me a AWG custom Stratocaster ! I was so taken aback he would even consider building me one so I jumped at the chance , we discussed what I would like and a few weeks later I got the phone call from Andy to come and try my new AWG custom out , and wow it is amazing to play ! Anyway I could go on and on ............ 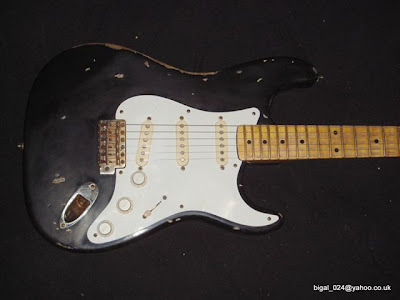 The guitar above Phil has called " the Gray one " he writes ......This is Andy`s old one- a Stratocaster which I bought from him-he built it all by hand.
Reading this I guess you realize Phil and Andrew [sorry can`t call him Andy !!!] go back a fair way and have a shared passion ! It is lovely that these guys from the band have come forward and are prepared to support Andrew in his fight to raise awareness and funding for MND -I know Andrew is delighted and really touched by their kindness and support. Please pop along and help make the evening a great success -these boys, really are a great blues band ! 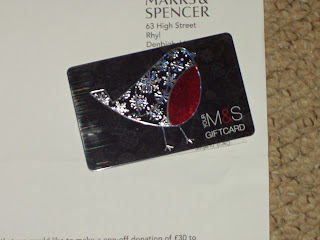 These are some of the raffle prizes I have been sorting out today , the cushion has been donated by a lady whose mother is suffering with motor neurone disease , it is all beautifully hand made with little red beads sewn into it-its gorgeous ! 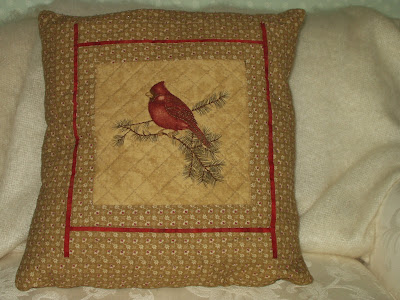 The M and S card is for £30 and arrived last week after I had written a letter to Marks and Spencers asking for a donation for our raffle ! great result ! Below are just some of the items that have been donated ! 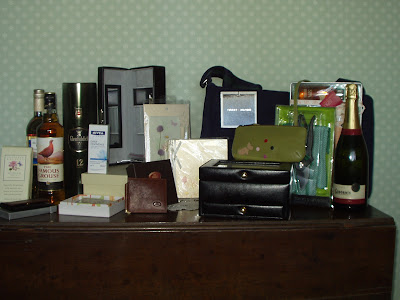 raffle tickets will be £1 a strip !!! contact details janprestatyn@hotmail.co.uk

Time is flying by! The do sounds terrific, I wish I could, just drop on in. It is going to be a blast! I hope you all have a great time and that you make oodles of money for MND!

Well done, I hope the event is a real success

The guitar is beautiful.
I love the band's name.
I hope you have a blast and raise a lot of money.

Iwill buy some raffle tickets from you... but cant go I am afraid... working nights and there is a wedding at work so NO ONE wants to swap!
sorry
j

if I lived closer I would be there, however as it's a little way aways, I will be there in spirit with you!

Thank you for your lovely comments. I hope the evening is a huge success and you raise lots of money. Take care.
Jo xx

Got the Hamper ready for the raffle Jan,
Love Ann xx

Wow Janet this is another special do for MND! It's really cool how Andrew has left a mark on so many different artists. Both your brothers have done this with their vocations. Happy St.Paddy's Day!
xx-cassie