Can you name the location and the film ? 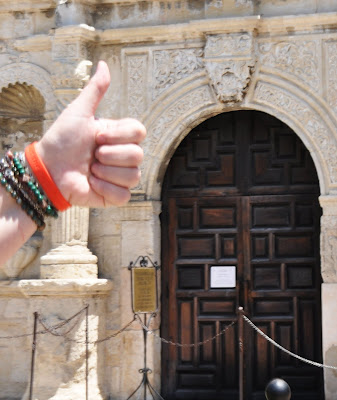 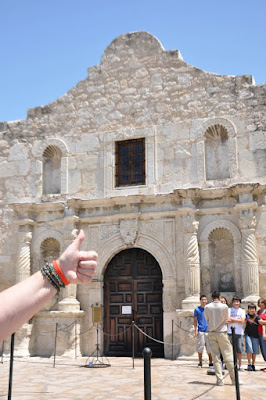 Many thanks to Janet T for making a fifty mile trip from her home in order to capture this iconic shot-Hmm any ideas where it is ? Okay , okay I`m feeling generous today so here are a few clues to its location. This location is famous for a battle which took place here in 1836-a 1960`s film was made starring John Wayne about it and later in 2004 Dennis Quaid starred in a film of the same title -get guessing and win yourselves a free MND band !

Email ThisBlogThis!Share to TwitterShare to FacebookShare to Pinterest
Labels: Name the location/film and win a free MND awareness wristband

The Alamo is located in San Antonio, Texas, just in case you needed that information also.

I am old enough to have seen both versions of the movie.

Good Morning, Janet! (Well, for me anyway)That was my "guess" as well, ha ha. Although I have never been there, I have seen it enough.
How is everything going and how is Dear Andrew? I often think of poor Jayne as well, how is she doing?
We have a beautiful day here, but they say it will be very hot again. Is your summer cooling off?
Thinking of you all.

That's a tricky one Janet. Is the film 'Ben Hur' and the location Walsall High Street?

Wait a minute, I don't think Dennis Quaid was in that one...

Oh yes, the Alamo, San Antonio, Texas. Took my Mum and Dad there 25 years ago. Could be the West Bromwich Road though ;) lol

oh poo ! I think I made this one was way to easy for you all !
Yes -The Alamo was the answer I was looking for !
Andrew is ok at the moment thanks Sharon-he did have to be rushed to hospital last week when the nurse changed his traci and it started to bleed-knocked him back a bit -we visited him yesterday and he was looking a little better,The weather has been lovely here today too -hoping it stays like this for next week when I`ve got a few days off ! LOL x

Call it what you like Tom -no band for you ! xx

Hi Janet, just popping by to thank you for visiting on my earthquake post. I also just read your comment about Andrew's episode having to go back into hospital last week. Do hope he was able to get back home fast. Looks like we might have a bit of rain today, and there has been no more rumbling since the house started acting like a fun-house ride! Have a great weekend with lots of lovely sunshine hopefully :)

Maybe I should have gone 50 miles in another direction to Bracketville where the set for the 1960 film still stands or outside of Austin where the set for the 2004 film. Both replicas look more what the Alamo looked like in 1836. (The mission was closed in 1793. Ten years later, it became a fortress housing the Mexican Army group the Second Flying Company of San Carlos de Parras, who likely gave the mission the name "Alamo".) Just a bit of history.

I hope Andrew is doing better.

Thanks for that little bit of history- very interesting , I think however I was a bit over generous with my clues !
Andrew is doing a lot better-thank you x