Help Gethyn give MND the boot ! 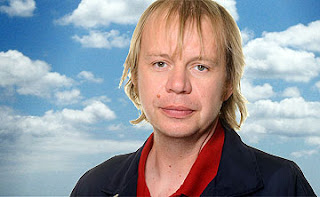 A welsh actor is among a team of celebrities who have agreed to help raise cash in memory of a popular Bangor man Iolo Owens who died aged just 50 from motor neurone disease. Llyr Evans -see pic [brother to actor Rhys Ifans ] and fellow celebrities from the S4/C programme Rownd@Rownd are playing against the HSBC bankers.
The match has been organized by bank manager Gethyn , in memory of his father, it will take place at
Y Felinheli Football Club Bangor on the

Sunday the 28 th November 2010, there is a half time raffle , with some fantastic prizes

Villa in Spain-sleeps 6 for a week

Sunday lunch at Signatures Conwy for 2.

2 tickets for the panto at Venue Cymru


Wishing you lots of success with this event Gethyn, I think its absolutely brilliant what you are doing ! hope to see you there on the day !
Posted by Janet at 03:55

Happy to go along and give a hand if they need us Jan, and you can put me down for £10.OO of raffle tickets Ann x

Hope the day is a huge success and great prizes to be won:)